Owning A Vintage BMW Isn’t For Everyone, But Once You Have The Bug…

…When the e9 was finished in August of 2011, I had the car delivered to Bimmers R Us, the shop who serviced my M Coupe, to do an inspection. It checked out great, and the only thing left to do was drive. As expected, the Getrag 265 did wonders for highway driving. The 535 sourced 3.5 L engine did not disappoint. I was happy with the results.

But this is not the end of this story – for a couple of reasons. First, you have already figured out that I do not work on my own cars. I envy those who can and do, but I am just not that guy. Second, with old cars stuff goes wrong. It is inevitable. You cannot blame yourself and you cannot blame your mechanic. It comes with the territory. Want reliability, lease a new Toyota every two years. What was I supposed to do when, in 2017, my wife and I decided to move permanently to our vacation home in Port St. Joe, Florida (Population ~3,000 before hurricane Michael)? We are 1.5 hours away from an airport or movie theater. Not a lot of high-end auto mechanics. And to complicate matters, by that time I had purchased a 3rd BMW (2013 M3 Lime Rock Park Edition). And I still had my Porsche. Okay, the modern cars could be serviced a couple hours away in Tallahassee, not a deal breaker. But, with all due respect, the typical BMW dealership mechanic has never worked on anything like an e9. I have learned this time and time again. 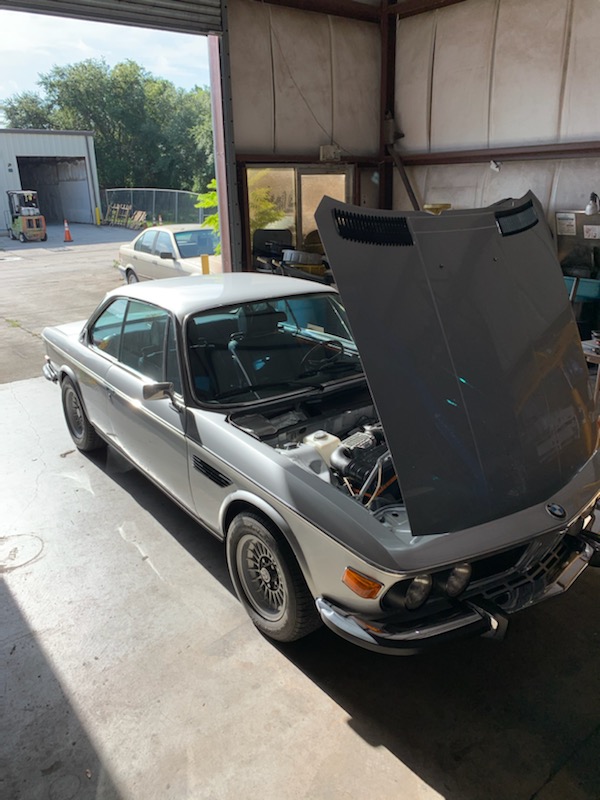 Despite not having found a shop to work on the coupe, we took a leap of faith and moved. After 2 plus years I still had not found a shop that even wanted to work on it, let alone was good at it. As a result, I had stopped driving it – and that is just wrong. So, in a last ditched effort I reached out to the BMW CCA for help.

In St Louis we were active members. We went to dinners and parties, drove, led, and even mapped out routes for Club drives. We loved it and fed off it. So, even though we had not been active since moving, I thought the Florida Suncoast Chapter that covered Port St Joe could probably help. I reached out to Stan Dale, the President, and within a half hour we were emailing back and forth about connecting, which we did in short order. After getting to know one another I briefly explained my reasons for reaching out. Can he help find us a qualified mechanic for our e9? He had someone in mind he was sure could and vowed to get back to me with contact information. I did not have to wait long. That same day he emailed me with contact information, and I fired off a text to Frank Mann, who Stan had explained also owned an e9. He was the local chapter’s go-to on questions about vintage BMWs. We connected the next day and it was if the clouds parted and the sun came out.

Frank understands what it is like to own this car. How important it is to have someone you trust work on it. By the end of the call we were finishing each other’s sentences. He told me about German Motorwerks, which is in the Orlando area. That is 6 hours away from me, but he swears by their work. It is a husband and wife operation and they do not advertise – they are too busy. He offered to reach out to them and introduce us, which I appreciated.

I did connect with Jim and Deborah at German Motorwerks. Things are looking up.

And that brings me to the next evolution for VIN 2260505, and our second installment of Project 3.0.  My theory is that If I refresh (remove, clean/paint or replace, etc.) the most critical mechanicals that are old, I can get relatively worry-free driving – to a point.  And now that Frank connected me with a shop I can trust, I am going to put that to the test.   Look for details in an upcoming story.  And wish me luck.

FSC BMW CCA would like to thank Chris and Margaret for sharing their story. While this concludes the 3-part series on Chris and Margaret’s 3.0 adventure, stay tuned…we look forward to the next chapter when Chris unveils the details of the 3.0 restoration currently in process. Can’t wait!

The Schroeder’s have been BMW CCA members since June 2011. Chris is retired. In addition to BMW’s other interests include fishing the Gulf, collecting vinyl records, cooking, and volunteering for the St Joseph Peninsula Turtle Patrol. He and his wife Margaret (& Odie) live in Port St Joe, Florida.