Owning A Vintage BMW Isn’t For Everyone, But Once You Have The Bug…

…Throwing caution to the wind I overnight-ed him a cashier check, arranged for shipping, and held my breath. A couple of days later he called and confirmed the sale. I had found my coupe.

When the car arrived (which was August of 2009) it was even better than I was expecting.  I was over the moon…

Exciting and Carefree Driving…For A While

My wife and I spent weekends in the coupe, retracing routes we had driven on Porsche Club drives. At the time we had not yet joined BMW CCA. The e9 is not a sports car, per se, it is more of a grand tourer, which is perfect for country drives along rural roads. To me, the elegant and narrow A and C pillars in the e9 create an openness that rivals the feeling you get in a convertible. I do not know how else to describe it. It is positively magical.

That is the romantic part of this story, and believe me, it is great! However, here is the other side of the coin. I meticulously maintained and detailed the car. It never left the garage if there was even a chance of inclement weather, and I never washed it with a hose and bucket (no need to taunt the rust gods after all). I loved owning it, but I felt a responsibility to keep it nice.

Then just over a year after purchase we were on another solo drive hours from our home. When I accelerated hard, I heard knocking followed by a loss of power. I immediately steered off the road and shut the car down. Something was clearly wrong, so I called a wrecker. After a 3 hour wait in the blazing Iowa sun the wrecker came. We caught a ride in the cab of the wrecker and deposited the car at a specialty shop before taking a taxi home. A few days later I found out the engine was 1.5 quarts low on oil, despite no signs of a leak. Only a week before I had the oil changed and replaced the oil filter housing, so I was both confused and upset. Regardless, it was my fault for not checking the oil level before we took the drive. 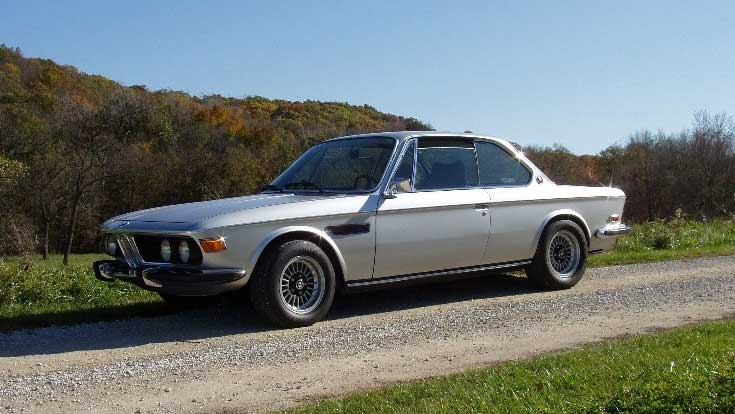 I was then faced with a decision – should I rebuild the original numbers matching engine, or consider the very popular swap to a more modern Motronic fuel injected engine and at the same time a 5 speed? After conferring with 2 California based shops that I’d heard so much about on the e9coupe.com website, I decided on the swap. Both shops told me that, if it was theirs, that’s what they would do (while keeping the original engine and transmission in case it ever made sense to put it back into the vehicle for “originality”).  Their logic seemed sound – the vehicle would be more comfortable at highway speeds with the 5 speed and a more modern engine would likely be more reliable and less expensive to service. Remember, they told me, many of the e9 parts are no longer available from BMW and you are forced to scavenge for used parts.

The original plan was large, but well defined. I found a shop roughly an hour from Des Moines that not only had experience with e9s, they owned two and had raced them back in the day. We hammered out a plan of action and I had the car shipped there. They warned me it would be a while, maybe as much as 6 to 9 months before they could complete the work. I was okay with that.  Unfortunately, with time on my hands I kept adding things to the project.

As long as I had the engine out, why not refresh the engine bay? The battery tray looked a bit shabby, might as well fabricate a new one. Probably should fix that dent in the spare tire well.  In the end, I am partially at fault that it took 18 months before I got the car back. That is a long time. By then we had move to St Louis.  By then I had purchased another BMW (an ’07 M Coupe, but that’s another story).

When the e9 was finished in August of 2011, I had the car delivered to Bimmers R Us, the shop who serviced my M Coupe, to do an inspection. It checked out great, and the only thing left to do was drive. As expected the Getrag 265 did wonders for highway driving.  The 535 sourced 3.5 L engine didn’t disappoint. I was happy with the results.

The Schroeder’s have been BMW CCA members since June 2011. Chris is retired. In addition to BMW’s other interests include fishing the Gulf, collecting vinyl records, cooking, and volunteering for the St Joseph Peninsula Turtle Patrol. He and his wife Margaret (& Odie) live in Port St Joe, Florida.