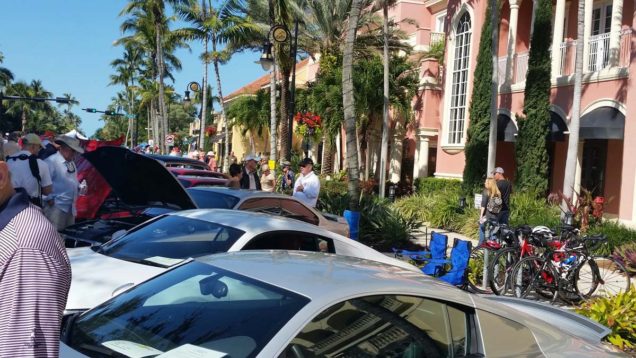 For the twelfth consecutive year The Naples Ferrari Club invited all car enthusiasts to come see cars of all kinds.  This year on Saturday, February 13, 2016 some of the world’s fastest, exciting, and most beautiful chariots all under the beautiful skies of sunny Naples, Florida were on display.  The Naples Ferrari Club also collects donations to help special needs children and their families.

The ‘Cars on 5th’ show is about helping the community and giving to those in need. Donations from the attendees and individual contributions to featured charities raised over $450,000 over the past 11 years. The 2016 12th Annual Cars on 5th benefited St. Matthews House, which gathers contributions of food and clothing, the proceeds which help to operate food pantries and shelters to care for the homeless and hungry of our community. This year’s show collected a record $130,000 for St. Matthews House.

Over 100 Ferraris were on display with a mix of Vintage, Jaguar, Lotus, Triumph and Bentleys.  Porsches were plentiful including some rare race cars. American cars were not overshadowed, with over 60 Corvettes and other muscle cars on display.  Mercedes and VW had a significant dealer display.

Several FSC BMW CCA members were on display, however, the BMW collection was fractured and set among other brands.  Pat Dargan’s M3, Scott Crater’s M1, and Mike Sonderby’s 2002 were a few BMW’s we spotted in the crowd.  CCA members Bill and Mary Caldwell & Phil and Lois Castronova were each able to register and show their Porsche.  (Congrats to Lois Castronova for being a St. Matthews House volunteer…she rocks!)

We always see a ton of FSC BMW members enjoying the show.  Make this a “must see” on your 2017 calendar.